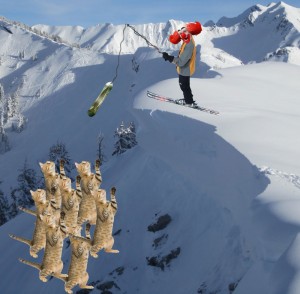 To preface this, I think skiing is rad. I prefer snowboarding, but I definitely don’t have anything against skiing, or skiers in general. With that off my chest, over the past week there’s been a questionable article making daily appearances in my news feed titled “Can Snowboarding Be Saved ?”. For reasons I’ll explain here shortly, I’m not linking to it, you’ll have to use the ‘ol Google or find it on OutsideOnline.com. The gist of the piece is that snowboarding has lost its “cool” and skiing is luring snowboarders onto two planks. The writer tries to tie in an ancient short lived snowboarding rendezvous with a “been there, done that”, while dropping his “Burton Woody” experience for a dash of street cred. His rationale is that because snowboarding hard good sales are down(in a slump retail economy) and that skiing is slightly up, snowboarding has lost it’s “cool”. In fact, the url path of the article, which might have likely been the original title, is /snowboarding-is-screwed.html. Really?

Before I get into the real purpose behind my rant, a few thoughts on this weakly supported rationale.

Now onto “Link Bait”. The old saying “any publicity is good publicity” often applies on the Internet in ways the general population can be unaware of. Without going into lengthy detail, at the core, Google’s natural search algorithm relies heavily on links, and now recently social media signals. There’s no concrete formula, but Google doesn’t really care whether you’ve said something stupid or groundbreaking. If your website receives naturally occurring inbound links from other websites, it strengthens your natural search ranking and topic authority.

The formula for link bait is simple on the surface. Just pick a controversial topic on the peripheral of your niche that won’t offend your core audience, and go for it.  As long as you’re not killing kittens, any unanticipated negative PR will often blow over quickly. There are endless instances of this every day. Why I’m against this, why I don’t support that, why this sucks, etc. Get people riled up, get links.

There have of course been a wide variety of rebuttals (and therefore links) to this article, which in turn will help OutsideOnline.com rank “better” for snowboarding related Google queries, and in general further bolstering their overall search footprint. Try to find another article on Outside.com with 500 comments and 30,000 shares. Even their “flatulent cows that blew up the dairy farm” piece got 12,000 shares, which is the next closest I could find of recent. Due to controversial responses, Outside likely had to remove the post from their own Facebook wall, even though it looks to have doubled their normal rate of fan acquisition for that particular week.

At the end of the day, it is safe to assume Outside’s core audience leans more to the skier side of things, and by producing the article, they’ll only offend only a very small segment of their audience, while at the same time reaping significant favor in the eyes of Google’s natural search algorithm. The Internet can be a fun and engaging place to share your opinion, but with this in mind think twice before linking to something you’re in disagreement with, as you could be inadvertently supporting them.

Today the news of a competitor “not” competing in the Olympic snowboarding slopestyle event is significantly outpacing any Olympic skiing content in the mainstream media. Snowboarding is definitely screwed. I also realize this blog post could be construed as link bait, but don’t let that stop you from sharing it 🙂

4 thoughts on “OutsideOnline.com – A Study Of Controversial Link Baiting”