Snowboarders Suing Alta – How It Will Backfire On The Backcountry 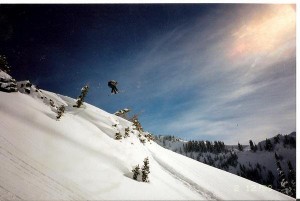 One of my most positive life changing events was back in 1997 when I embarked on a quest for snowboarding in Utah, and some college too. Every year between October and June I spent as much time as possible in the Wasatch, each season dedicating a larger percentage of those days to exploring the backcountry. For those lucky enough to know the backcountry here, I believe these sacred grounds have been inadvertently threatened by what might seem a worthy cause.

For those unfamiliar, here’s a quick back story. There are seven world class resorts nestled atop three paralleling canyons in a geographically unique area loaded with epic terrain and annual snowfall totals exceeding 30 to 40 feet. Significant distances and elevations exist between resorts in neighboring canyons, but you can still hike/skin/climb/traverse them in a day’s work. For $300 there’s even a guided interconnect tour that will show you the ropes. Hop in your car in downtown Salt Lake City and land at one of these resorts or access points in under 45 minutes. If my right knee wasn’t four surgeries deep, I’d still be living there.

Ski resorts are businesses, owned by shareholders for long term investment, aiming for the highest return possible. As a result, there are nine expansion plans in the works, with the most recently controversial being SkiLink, an attempt to connect The Canyons and Solitude. There have of course been strong arguments for and against SkiLink, but for the most part it’s money vs. environment. The first two of these seven resorts to offer easy connectivity between canyons will likely reap strong profits, and bragging rights. So the race continues…

Alta is home to some of the best snow and lift accessed terrain in Utah, but is off limits to snowboarders and the last “skiing only” resort on US public land. On Wednesday (1/15/14) a group called Wasatch Equality filed a federal lawsuit against Alta in an attempt to break their ban on snowboarding. At first I applauded their efforts, then I realized the price could come with detrimental side effects.

Alta has been drooling over the opportunity to expand their lift serviceable area for quite some time. They’re butted up against fantastic, steep, high elevation terrain their chairlifts don’t have access to, yet. Alta even has a cat skiing operation permit on the Grizzly Gulch section, and they’ll even take money from snowboarders. Their efforts to put in a chairlift here were recently disguised as more a means for avalanche control, rather than terrain expansion. In the end, Alta’s owners know if they want to put in chairs on Flagstaff and Grizzly, the USFS will require them to allow snowboarding as part of the deal. It just won’t work any other way, if Alta wants to expand, they’ll have to allow snowboarding.

So now, say your one of the owners of Alta. You’re revered by your devout fans who recognize you as the last resort that would ever “sell out” their stronghold in the name of cash or expansion. My guess is the owners of Alta are actually welcoming this lawsuit with open arms. They would absolutely love to allow snowboarding as it would inch them closer to expansion, and bring in more revenue. At most they’ll see 10% attrition from folks who might head to Deer Valley, but allowing snowboarders will push them to maximum capacity($$$) on a more regular basis. If Alta’s owners sold out on their own without a fight, their business would forever be the butt of jokes in their purist skiing community. If the owners appeared to cave to snowboarders in a legal battle, at least their constituents know they fought till the bitter end. Unfortunately I think resort expansion is inevitable, and in 20 – 40 years the Wasatch will be covered in trams, gondolas and chairlifts. Sooner or later Alta will have to stake their claim on adjacent terrain, but I say we make them concede on their own.

I’d like to think any snowboarder in the Wasatch would much rather choose keeping the backcountry to themselves, vs. being able to ride at Alta. However, maybe members of my camp are dwindling and everyone just wants to ride chairs. I haven’t been back to Utah in a couple of years, maybe this spring I’m due for a visit. I’m also not afraid to admit that if the lawsuit is successful, I’ll probably be on my way up the Supreme chair as soon as possible.

Be careful what you wish for, you just might get it.

UPDATE: There’s a more recent article on SaveOurCanyons.com about the interconnect that I missed when researching this topic.  If you’re interested in being a part of the solution, check out how you can help here.