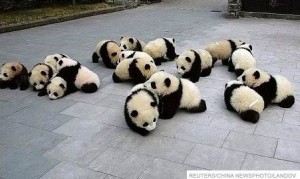 Which One Of These Is Not Like The Others? Maybe Google Knows?

My wheels have been turning on this one for minute now, wondering when inspiration would tip the scale and spill my thoughts onto this digital canvas, so here we go…

Back in May the SEO community went berserk over a monumental shift in a particular businesses’ natural search engine rankings, along with dozens of other large websites. There was, and still is, significant speculation on why this happened. Was it the Panda 4.0 algorithm update? Was it related to the security breach? Was it retribution for releasing a report stating Adwords doesn’t dive incremental revenue for them? (I find this silly because they’re probably one of the largest PLA spenders, a topic for another time)  If for some reason you didn’t hear about this and want to know more, check out these pieces from May 21st; Search Engine Land, MOZ, Search Metrics, Word Stream. A wide range of websites were hit with this algorithm update, but of course the bulk of the chatter will focus on who appeared to take the biggest hit.

How many times have you searched for a product in Google, only to see the same usual suspects near the top of the list of organic results? Well one of those websites lost a large portion of their “king of the hill” placement, and in fact is now absent for many of the common queries it used to dominate. If there’s any business on the web that could weather a significant SEO hit like this, it’s probably eBay. They’ve been building an active and engaged user base since 1995 and in 2013 posted a net income of $2.86 Billion, vs. Amazon’s $274 Million (though Amazon saw 5x eBay’s revenue). eBay’s ability to remain profitable shows they are of course leaner and likely less volatile. 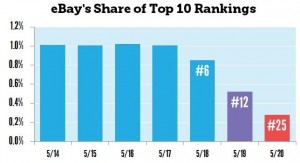 Click The Image To Read The Article On MOZ

According to this study done by Rishi Lakhani at Refugeeks using SEM Rush, the culprit here was possibly a sub set of pages eBay was using that were, well, a bit overcooked in terms of presentation and anchor text usage. It’s also worthy to note that less than a month ago eBay’s head of SEO for North America and Europe jumped ship to join the Search Metrics team. Likely much greener pastures when compared to what he’s probably dealt with in recent times.

So what does this mean for Google, it’s users(us) and the future of small businesses, passions and hobbies on the web(some of us)?

Google’s main product is and will always be search(yes, even more than Android), with an end goal of awesome user experience. It’s been debated they’ve become too diverse in their product offering and might start to lose their grip on search, but I still find that very hard to believe. Whether you’re an advanced user, or it’s your first day on the internet, Google’s goal is to help you easily and quickly find what you’re looking for, remember the experience, and come back again. With this in mind, Google has a mission critical reciprocal relationship with the rest of the http (and https) world. Without these websites, there’d be no need for Google, without Google, users wouldn’t find these websites.

No SERPs For You!

Google nudging these giants off their pedestals provides further visibility to smaller (and hopefully more white hat) websites, which when properly optimized will generate revenue. The more revenue these small to medium sites generate, the more features and content they can afford to provide, the further robust and engaging they become. As diversity and quality expand into the ecosystem, the larger sample of sites Google can serve for particular queries. Whether these websites are monetizing though Google Adsense, display networks, affiliate marketing or selling their own goods direct, it means the $pie$ hopefully gets split a bit more evenly.

If the internet were only eBay, Amazon, Facebook, Netflix & CNN, that would be pretty boring, and there would be no need for Google. With the way net neutrality conversations are going, we could unfortunately be headed down that road much sooner that we think. But maybe with more evenly distributed revenue streams(ahem…organic search rankings), there would be more small to medium businesses willing to get involved in the net neutrality issue? Maybe Google really is that altruistic? (and of course self preserving)

The emerging theme I see, is that Google knows it depends on small to medium sized websites to survive, and that affiliate marketing and internet monetization models need to flourish so these properties can continue growing. Granted Google will make plenty via Adsense and Adwords on the back end, but I honestly believe there’s still a more holistic approach going on in Mountain View. Or at least I’d like to think so.

Some speculate that because Google shut down the Google Affiliate Network, they don’t see a future in affiliate marketing.  If so, then why is Google Ventures a stake holder in VigLink, one of the ultimate affiliate monetization tools? For the three of you that actually read my blog, yes I wrote about this a while back. One of these days Google is going to make a mash up of Product Listing Ads/ AdSense / VigLink and rise to dominate the affiliate tools landscape. Or maybe not… Google Ventures also has a stake in Retail Me Not, another site spanked with the Panda 4.0, and their recent earnings report shows it. I think more than investment, Google Ventures has their hands in these projects to keep a close eye on how search and monetization of search work outside of what Google can see and measure on it’s own.

So how does this affect me?  One of my hobby enthusiast sites, WestfaliasForSale.com, has never been able to overtake eBay in organic search for queries related to this niche. At best, it has lived somewhere in the middle of the first page for even the most obvious exact domain match phrases like “westfalias for sale”. Now it is in the number 1, 2 or 3 spots, and eBay is no where to be seen. So far the Panda 4.0 likes me, at least a little more than it did before. 🙂

Now I just have to figure out how to better monetize my Westfalia site, as the eBay Partner Network is the only affiliate program for selling vehicles.  Recently I’ve been hammered with negative commissions (over half of what I made in July) for transactions that reportedly were not completed.  If you want to read more about this, check out this post on the ePN blog, or log into their now “hidden from search engines” forum to catch up on the latest banter. This will happen with some vehicle auctions,  if the buyer and seller decide to complete the transaction outside of eBay’s marketplace.

So, any retail site that has been hit hard by Panda 4, or any recent update, how do you regain these rankings? Well, just find the fresh editorial content sites that moved up into the top spots for the terms you lost on and pitch them on your affiliate program. While it’s not a direct link from a top SERP spot, it’s only one click beyond that. On that note, if you are one of these etailers, make sure your affiliate program is well sorted with quality tools, support, tracking and customer service. Pitching a broken program with holes, leakage and faulty tools can set you back quite a ways in reputational management.

What’s in store for the future?  I’m going to guess we’ll see much more subtle Google algorithm corrections occurring on a more regular basis. Google will continues to gather, analyze and utilize more data points for the ranking algorithm, eventually to where even the most seasoned black hat SEO will find the dark side no longer profitable. As search becomes the hottest commodity in the known universe, I hope Google continues to share the wealth with the little guys and maintain as diverse an ecosystem as possible. A bit cliche, but only time will tell.

3 thoughts on “The Panda Diversity Complex”